Over last weekend, Ciara competed in the Surrey Open Championships Feis at Chessington.

The was Ciara Twomey’s first “Open” competition where she would perform  against children from other schools, not only London based, but anyway in the  world if they so wished.  She was entered in the Novice (beginners) under 12 for four soft shoe dances.  Her group had around 20 children in each  dance and the standard was high.  Understandably, Ciara was very nervous as there were 4  stages going simultaneously  (in a very large sports hall) with 4 judges, one for each stage and a live musician: she had never performed to live music before.  Her  first dance (Reel) went well once her nerves settled.  Ciara found the second dance tough but after some comforting words from her teacher she seemed happier in her next dance (Single Jig).  When it came to the final dance (Slip Jig) she was back on form, looking relaxed and actually enjoying herself. 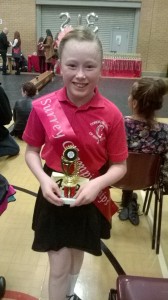 Her results were impressive: second in the Reel and first in the Slip Jig.  This means she moves to the next 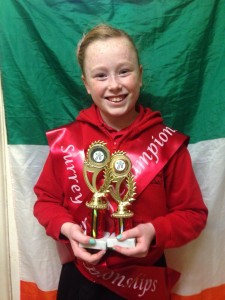 grade (Primary) in these two dances.  She has already started learning new steps in these.
Well done Ciara!