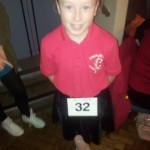 On Saturday 22nd November, Ciara took part in her first dance competition, traditionally known as a feis organised by the Conor Academy of Irish Dancing where Ciara has her dance lessons.  The Academy holds a feis twice a year, but this is the first time Ciara has competed. Her teacher informs us that Ciara has now mastered most of the soft shoe dances, and is working hard on the Slip Jig, the most difficult of them.  If you want to know what a Slip Jig is, check out Wikipedia. Ciara is also now working on her team dances – including the six hand reel, which, we are told, brings new challenges. 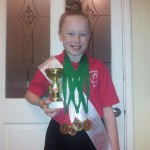 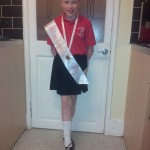 Anyway, back to the feis.  We are pleased to report that Ciara performed very well on the day winning a number of medals, a sash and a trophy.  Her teacher was most impressed with her performance – along with her teammates – in the five hand reel, where they finished 3rd (out of 6) against much more experienced teams.  Ciara finished fourth overall in her group, a very creditable performance in her first competition and will grow in confidence as a result.

She’s already proudly been displaying her medals around the school.  Thanks to Ciara’s Mum for these pictures.